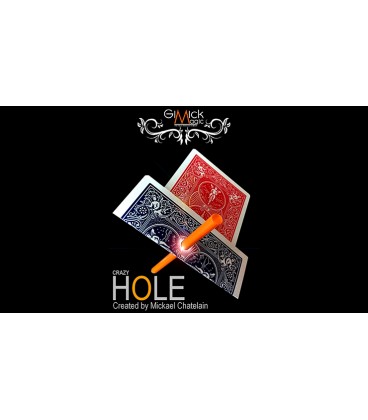 Show two cards to your spectators, one blue-backed, one red.

The blue card has a single hole at the bottom while the red has two holes in the middle.

Folding the red card in half lengthwise, the two holes are perfectly aligned.

Everything is clean as each move is made inches from the spectators' eyes.

Slowly place the blue card inside the folded red card, aligning the holes and refold the red card.

Hold everything together as you pass a little straw through the holes.

Show everything from all sides. Everything is aboveboard.

Have one of your spectators pull the blue card to verify that it cannot move as long as the straw is holding everything together.

Impossible? Are you sure?

Explain that it is now possible to move matter, to move the center hole and so move the blue card.

No sooner said than done!

Take the nested cards and without the slightest manipulation, begin moving the blue card slowly to the right.

Now move the card to the other side, to the left. The card seems to pass through the straw as it shuttles freely from right to left.

It's easy, you explain. The hole moves, that's all!

At these unlikely words, remove the straw to show that the hole is no longer in the center, it has now completely shifted!

Now reinsert the straw and move the blue card to the middle again, in its original position.

Once again, remove the straw to show that everything is as it was at the beginning.

Believe me, this is a really surprising illusion and your spectators will be wondering for a long time how such a thing is possible!

Remember these points:
Only the two cards and the straw are used - nothing else.
Self-working, no manipulation
No suspicious moves, everything takes place right under the spectators' eyes.
The straw holds everything firmly in place, and yet...
The illusion seems completely real; you will not believe how convincing it is!
The "gimmick" is invisible and 100% reliable.
Special bonus in the video explanation!