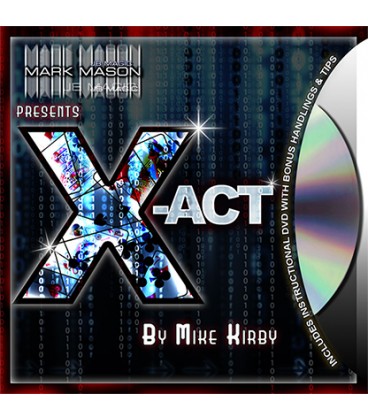 The buzz about this trick is phenomenal.

When Mike sent me his idea for A Card At Any Number (ACAAN), I was shocked at the creative, super clean handling he had created.

X-act is direct, killer magic that you will love to perform. You will love the method almost as much as the reactions you will get when you perform X-act.

Comes complete with all the special props required, plus two knockout handlings.

Handling One
A card inside an envelope is placed on the table next to a deck of cards. The spectator asks for any number from 1 to 52. The deck is removed from the card case. The cards are dealt face up one at a time until you reach their selected number. The card is removed from the envelope it matches the card at their number.

Handling Two
It gets no cleaner than this. A playing card is placed face down on a spectator's hand (no envelope). The spectator names any number from 1 to 52. The deck is removed from the card case. You deal the cards face up one at a time, finally arriving at the chosen number. It's hard to believe; they turn the card over in their hand. I think you have guessed the rest.

Instant reset
Only one deck
No memory work
No multiple numbers to learn, etc.
Always deal the deck the same way
Only one envelope
Only one card in Handling Two
No switch of any kind
No adding Jokers