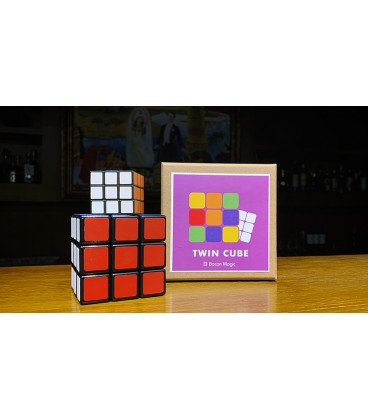 The above paragraph describes a very classic Rubik's cube magic process. However, the magician Long Long has made this process more magical, cleaner and simpler.

The basic effect of Twin Cube is just as described at the beginning of this article. However, unlike the classical process, Twin Cube has the following two features:
Everything you need to use to perform is laid out from the start, so you don't have to hide anything.
At the end of the process, there is a magic effect that instantly restores the small Rubik's cube, which can happen in the hand of the audience. And a lot of actual performances prove that the audience can barely detect your moves and will be shocked by this effect.
The prop contains a big Rubik's cube with a nice dual mechanism structure. And even though the cube is equipped with such a complex mechanism, it can still rotate in front of the audience without any abnormality.

Each set of Twin Cube is hand-polished and debugged by Erlich Zhang, the chief manager of Bacon Lab, with very fine workmanship. We believe that once you see Twin Cube, you will send out heartfelt admiration.