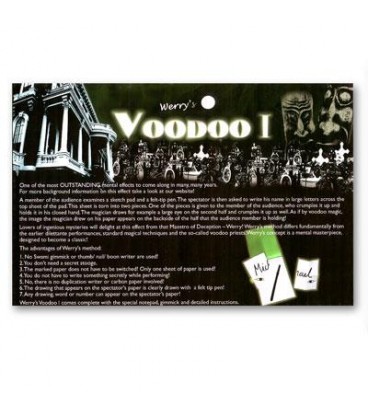 Voodoo 1 by Werry. Twelve years ago in 1995 an alleged voodoo priest showed tricks in one of Europe's most popular television shows. Some weeks later the methods of these tricks were explained to millions of viewers.﻿

Twelve years ago in 1995 an alleged voodoo priest showed tricks in one of Europe's most popular television shows. Some weeks later the methods of these tricks were explained to millions of viewers. A magician had given away the secret of the thumb writer to the producers of the TV show for a few bucks and for his own image-cultivation. By demonstrating the voodoo priests tricks a well guarded magic secret was explained in detail to millions of spectators. Werry was upset about this exposure. Being one of the leading trick inventors in Europe he came up with a totally new concept for a well known voodoo theme. With this new principle, he was able to blow away even those who thought they knew it all... Only a very small limited number of this trick was manufactured in those days. Now after nearly two decades Werry's Voodoo I is available again!

A member of the audience examines a sketch pad and a felt-tip pen. The spectator is then asked to write his name in large letters across the top sheet of the pad. This sheet is torn into two pieces. One of the pieces is given to the member of the audience, who crumples it up and holds it in his closed hand. The magician draws for example a large eye on the second half and crumples it up as well. As if by voodoo magic, the image the magician drew on his paper appears on the backside of the half that the audience member is holding!

Lovers of ingenious mysteries will delight at this effect from that Maestro of Deception – Werry! Werry's method differs fundamentally from the earlier dilettante performances, standard magical techniques and the so-called voodoo priests. Werry's concept is a mental masterpiece, designed to become a classic!

The advantages of Werry's method:

1. No Swami gimmick or thumb/ nail/ boon writer are used!
2. You don't need a secret stooge.
3. The marked paper does not have to be switched! Only one sheet of paper is used!
4. You do not have to write something secretly while performing!
5. No, there is no duplication writer or carbon paper involved!
6. The drawing that appears on the spectator's paper is clearly drawn with a felt tip pen!
7. Any drawing, word or number can appear on the spectator's paper!

Werry's Voodoo I comes complete with the special notepad, gimmick and detailed instructions.