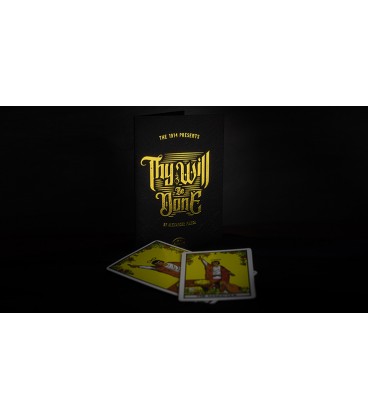 Thy Will Be Done

You place a single tarot card (provided) face down on the table while explaining that the card depicts a reflection of the choices the participant is about to make.

The participant sets the watch to a RANDOM, unseen time and places it face down on the table alongside the pen and the coin.

Their decisions seem SO free and SO fair!

Upon opening your eyes, you turn over the card that's been in view from the beginning to reveal the traditional "Magician" tarot card with an artistic twist.

To your participant's amazement, the card's imagery has accurately predicted the positions of ALL THREE objects.

To end with an added impossibility and ultimate kicker, you draw your participant's attention to the clock face printed on the card; It depicts the EXACT time the participant set the watch to at the beginning of the routine!

Thy Will Be Done ships with TWO high quality tarot cards that have been professionally and meticulously illustrated by esteemed playing card designer Destino. You will receive:
1x traditional tarot sized card for integrating with a pre-existing tarot collection, and
1x smaller, poker size card of the same design for your everyday wallet carry