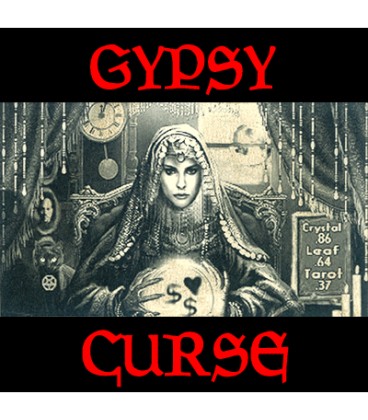 Only those that believe can see the image of her true beauty, that is the Gypsy Curse. Put upon her long ago by a suitor with great powers who loved her very much. She could not return the love he had, and was made to pay a price for that. He could never harm her, he loved her, but one day he put a curse upon her image. No matter who photographed her or painted her picture or drew an image of her, her face would come out horrid and ugly.

One day a lady appeared in her wagon asking for a reading. Afterward the lady asked for the Gypsy's calling card. She told the lady her image had been cursed and she could not give out her card because her image was on it. The lady politely asked if she could please see the card. The gypsy opened a small box and handed her a card. Her face on the card was grotesque.

The lady said her name was Morgana and she would put a spell on her image. It would not remove the curse, but anyone who believed the gypsy was indeed a good soul, would always see her true beauty. Morgana showed the card to the gypsy and the image of her face once again appeared beautiful on the card.

The image of the gypsy is only on one side of the card. You are able to change the face from cursed to beautiful by just holding it in your fingers. It can be done right in front of your audience.

The change can be almost instant from bad to good. This allows for a very good "dual reality" presentation. Show the bad gypsy to one person and ask them to remember the details of what they saw. Seconds later show the same card, same image to a second person and ask them to remember what they saw. One will see a horrible face and one will see a beautiful face. The good image will slowly change back to ugly by itself. You can actually watch the image change. You can also go from the beautiful face to the cursed face. There is only one side of the card with the image. That image changes.No switching of cards, no flipping the card over.

On the back of the card is a wonderful little fortune divination effect.

Each card is hand done and each face is unique, although they all look very similar to the pictures above. The cards are laminated which adds to the mystery of how the face can change when it cannot be touched. The card is sized as a business card and fits in your wallet.

You will have access to a private Gypsy Curse forum