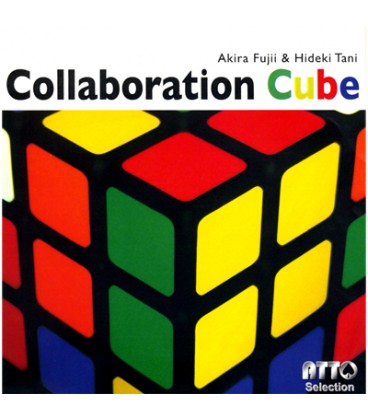 This is an incredible effect and routine with a puzzle cube by two Atsukawa Award Magicians, Akira Fujii and Hideki Tani. It contains a "sucker trick" and unexpected surprise ending in one routine. This trick is perfect for comedy routines.

A magician displays all six sides of a mixed puzzle cube. He states that he has the ability to solve it instantly. As he is saying this, the puzzle cube is immediately solved right in front of the spectators! The spectators think the trick is over at this point, but there is more to come.

The magician mixes up the puzzle cube again and says that he can solve it in 10 seconds. While the magician has a spectator count to 10, the magician tries to solve the cube. As the countdown ends it seems the cube hasn't been yet... but the magician claims that he made it! The magician points to another puzzle cube on the table. The color combinations of all six sides of both cubes are completely the same! However, it is still not the end of the routine.

The magician says that "I guess I should solve both cubes completely". He holds the puzzle cube and waves it sideways... Instantly the cube is solved! The cube can be handed out to spectators for examination.

The routine starts with a laugh, and then the spectator realizes the laugh is part of the next surprise. It finishes with a beautiful climax. The handling is outstanding and the techniques explained in the DVD are brilliant! The false shuffle by Akira Fujii is so effective it can be used for other puzzle cube routines.

The product includes both a gimmicked and ungimmicked puzzle cube (both 2.5" x 2.5" x 2.5"), as well as a DVD containing the full routine presented live and step-by-step instruction.

*The DVD may not play in all DVD players but will play in computers.