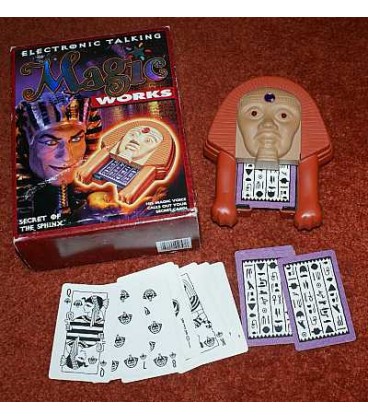 Secret Of The Sphinx

A sphinx-head card houlettte is shown, and also a packet of 14 different cards – they look like a suit run of playing cards, but with sphinx heads for the suit pips, and an Egyptian/hieroglyphic motif. The cards can be handled and examined by the spectator – there is nothing for them to find (though the cards are gimmicked in a way that will never be detected).

A card is FREELY selected, and mixed back into the packet. Then the sphinx head houlette is activated, and one at a time, the spectator places a card facedown into the houlette tray. When the card is set in the tray, the Sphinx speaks, saying "Not that one!" or "It's not that card" or similar dismissal of the card just placed in the tray. But at one card, the Sphinx says, "That's your card". And of course, it is.

Note: the trick can be immediately repeated, and the card selected can be different. It could be repeated again and again, and the card will always be different, because there is no specific card that must be chosen. Also, the item is self contained, so the magician does not have to do anything to make the miracle occur. No secret transmitters, etc. Do it naked (if you must!).

This item has been unavailable for over a decade. The one I have for sale is in like new condition. Complete, with original instructions. No sleights or moves, so you can do this right away, and you will! (After you put in the necessary two AA batteries, that are not included)